If you are searching for a timeless and tasteful window that allows plenty of natural light to stream into your humble abode – look no further than French windows. Identifying them can indeed be challenging as they are often mistaken for casement windows. Nonetheless, they hold a certain je ne sais quoi that is unique in the world of window design. With a rich history and an ability to establish unobstructed views, in this article, we will explore this beautiful window design in more detail.

What are French Windows?
French windows are an undoubtedly classic and elegant style of window allowing plenty of natural light to stream into your home. Whilst they can be mistaken for casement windows the difference is that French windows, when open, don’t have a fixed mullion between their two panes. This not only creates a spacious opening but also views that are clear from obstructions.

You are most likely to come across French windows in dormer windows on the higher floors of a property, where the scenic views are most appreciable. They can be the perfect solution for several windows within a property. For instance, for first-floor windows where the opening isn’t substantial enough to meet fire escape regulations, or when a French door is too large to properly fit into an area on the ground floor.

Can a French Window be used as a Door?
There can be some uncertainty surrounding French doors and French windows. Many think that they are both the same thing, however there are some subtle differences. Despite both opening in a similar fashion, one of the most noticeable distinctions between the two is the overall height. French doors tend to be larger, typically 2100mm tall, whilst French windows are generally half this measurement (approximately). Of course, another clear difference is that window hinges cannot bear the same weight as door hinges. Therefore, French windows have a different handle specifically manufactured for windows.

The History Behind French Windows

Although the name suggests these windows originate from France, their design influence actually dates back to the Italian Renaissance. If you go back in time even further, it could even be said that there are some Greek inspirations too. Throughout the Renaissance, the former design values of symmetry, proportion and geometry were restored. Architects took inspiration from traditional Greek characteristics such as columns, arches and lintels. This trend inspired many interior elements – including windows.

During the war between France and Italy in the late 16th century, the French not only claimed numerous victories, but they also returned with Italian artwork and architectural inspirations. The French put their own twist on what is known today as the French window. Not only did these windows become aesthetically pleasing to look at, but the way they maximised light and ventilation made them a very popular choice.

The Benefits of French Windows
French windows are an attractive addition to any home, and they offer several advantages aside from their aesthetic appeal:
• Plenty of natural light streams in with French windows even when they are closed. Plus, the same also goes for when they are open, due mainly to the absence of a central fixed mullion.
• Eco friendly thanks to amazing glass technology and thermal properties. Therefore, you could cut down on your utility bills when the chillier months come around.
• Increased ventilation as a French window opens out widely to create a large open area.
• Flexibility as you can choose to have the panes hinged so that either left or the right section opens first. Depending on the style of French windows they can open either inwards or outwards.
• Well insulated as French windows help stop heat from escaping and keep the cold out when they are locked.
• Secure due to the frame design and lock options plus you can maximise security with double or triple glazing.
• Low maintenance as now French windows can be made from uPVC or aluminium as opposed to their traditional timber counterpart.

French windows can deliver the perfect appearance as well as a practical fit for any style of property. However, how do you know which material is truly right for you?

uPVC French Windows
Currently, uPVC is one of the most popular material choices for window frames in the UK. This is all thanks to its many attractive benefits including:
• Available in a variety of colours (can closely replicate timber)
• Easy to keep clean and maintain
• Steel core makes them exceptionally strong and secure

uPVC French windows carry forward the traditional architectural appeal and incorporate modern technology to deliver a practical and beautiful addition to any property. If you have a period property, uPVC French windows in a woodgrain effect can replicate old-style appeal perfectly. By incorporating additional features such as a decorative astragal bar, you can boost their quintessential European charm.

Wooden French Windows
We appreciate for many there’s nothing that matches up to the rustic feel of wooden windows. When it comes to your home, you may be contemplating between real wood or the timber effect. Whilst the decision is entirely yours, it’s worth knowing authentic timber windows can have their disadvantages. They require a lot of upkeep, are more prone to decay and can be more vulnerable to break-ins if they’re not taken care of properly. However, there is an alternative that mimics authentic appeal with the benefits of modern window technology – uPVC wood effect. This way you won’t have to give up the old-style appeal of wood – just go for a textured woodgrain effect instead. It has a very realistic aesthetic, that looks and feels just like traditional wooden windows. This means you can go back in time to replicate the original wooden French window but without the pitfalls.

Aluminium French Windows
If you’re designing a cutting edge, modern designer property, aluminium French windows are the perfect option. Their sleek, clean lines will put a contemporary twist on the charming French window. The material is so strong and is reinforced for peace of mind and durability. The material’s additional benefits include:
• Enhanced security
• Low upkeep
• Long lifespan
• Outstanding thermal insulation which can help reduce heating bills

Traditional casement windows comprise of a single window that fits within a sash. If you had two traditional casements next to each other, you would have to open each one individually. With this, you would see the vertical posts separating each window from its neighbour. Of course, this would leave you with an obstructed view – this is where French casement windows have the upper hand. They simply extend to open both windows simultaneously with the aid of a flying mullion. This means you don’t have a post in the way and can enjoy an open view of all the beautiful surroundings.

French casements are an ideal option when you need two windows next to each other. If you need a window for a large space, for instance above the kitchen sink – a French casement window is the one. They can also be a tasteful choice for bedrooms as they add a romantic feel to the bedroom whilst submerging the space with natural light.

Let’s discuss French window colour options, as this is going to be one of your leading design considerations, therefore it’s important to get it right. If a modern aesthetic is what you’re aiming for, go for aluminium French windows in popular classics such as Mid Grey, Anthracite Grey, Black or White. These are failsafe choices that will remain timeless – and they look beautiful too. Alternatively, if you want to keep with the old-school charm of French windows, opt for a uPVC wood effect in Honey Oak.

French windows can be created bespoke to you so you can be as creative as you please with your colour choice. Blush pink is set to be one of the new must-have shades for properties, so go for the unconventional and pick a subtle pink to bring to life the Cottage core trend. Personalised colours can be executed through state-of-the-art paint spraying in RAL or BS colour codes. This way you can put your own spin on your French windows so that it’s customised to your exact taste.

French windows are undoubtedly a stylish option that can offer an abundance of light streaming into a home that today’s consumers yearn for more than ever. Not to mention the charm they can bring to both modern and period interiors. They have come a long way since the Renaissance; however one matter remains consistent – French windows will always deliver on sophistication, beauty and practicality. 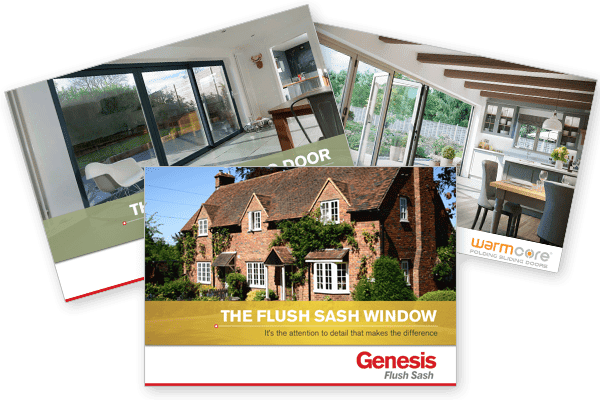